New Digital Monograph from the LibraryPress@UF 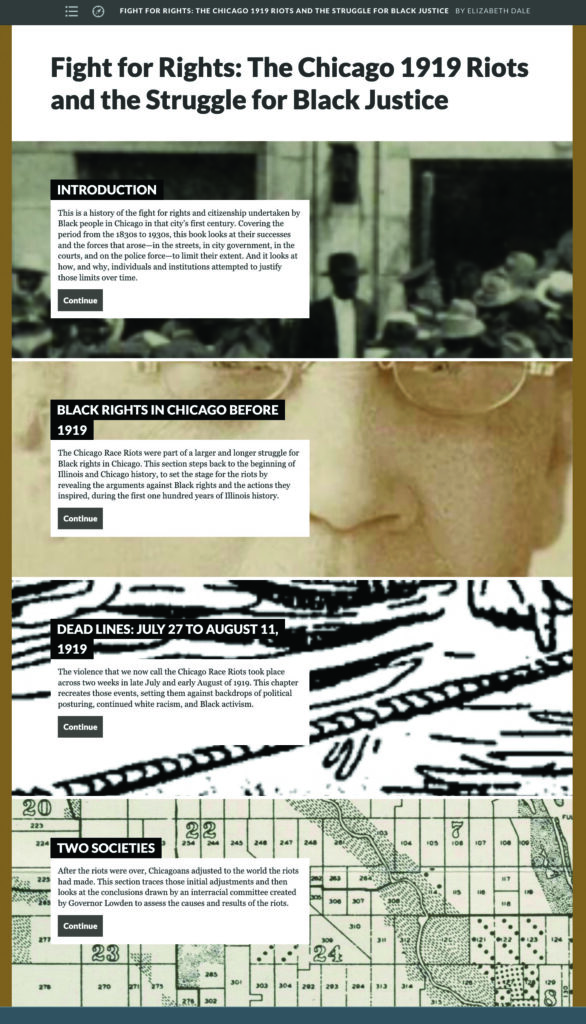 See the full announcement on Fight for Rights from the LibraryPress@UF website.

I am super excited to share that the LibraryPress@UF has published Fight for Rights: The Chicago 1919 Riots and the Struggle for Black Justice, a freely available, digital monograph, by Dr. Elizabeth Dale, Professor of History and Law at UF! The LibraryPress@UF utilized Scalar for the book, and it is our first major publication in Scalar, so an excellent resource itself and an exemplar that informs our future digital publications and processes.

From the announcement, about the book:

Fight for Rights traces the experiences of Black Chicagoans from the city’s founding in the 1830s, through the population boom of the Great Migration and the racial violence that shaped the summer of 1919. As a legal historian, Dale considers the aftermath of that violence through the 1930s and the forces that arose—in the streets, in city government, in the courts, and in the police department—to limit the rights of Black people.

Dale draws on current scholarship and rich primary sources, including newspapers, photos, maps, and documents. As a multimedia, online publication, the book incorporates many of these sources alongside the text for a closer look and better understanding of day-to-day lives and acts of resistance by Black citizens of Chicago. “Voices from Chicago’s First 100 Years,” a supplement to the book, identifies many individuals mentioned throughout the text, including key figures such as activist Ida B. Wells-Barnett and her husband, lawyer Ferdinand Barnett.

One section of the book delves into the trial of Walter Colvin and Charles Johnson, two Black youths accused of murder during the 1919 riots. Dale’s research into this case reflects the inherent bias of Chicago’s legal system, as even conflicting witness accounts and factual inaccuracies could not avert a conviction. This and other examples throughout the book highlight individual and community efforts—sometimes successful, often not—to attain rights on par with those of white Chicagoans.

Publication is supported by the George A. Smathers Libraries and the UF Department of English, with additional funding from the Dr. Thomas and Mrs. Leewood Woodell Endowment, dedicated to research in the digital humanities. LibraryPress@UF editors for the project included librarian and editor Perry Collins and former UF graduate student Dr. Rebecca McNulty.

Elizabeth Dale is professor of history and law at the University of Florida, where she has taught since 2000. Prior to going to graduate school to get a PhD in legal history, Dale was a civil rights attorney in Chicago. She is the author of several other books that look at the intersection of criminal and constitutional law, including Robert Nixon and Police Torture in Chicago (NIU/Cornell University Press, 2016) and A History of Criminal Law in the United States, 1789-1939 (Cambridge University Press, 2011).