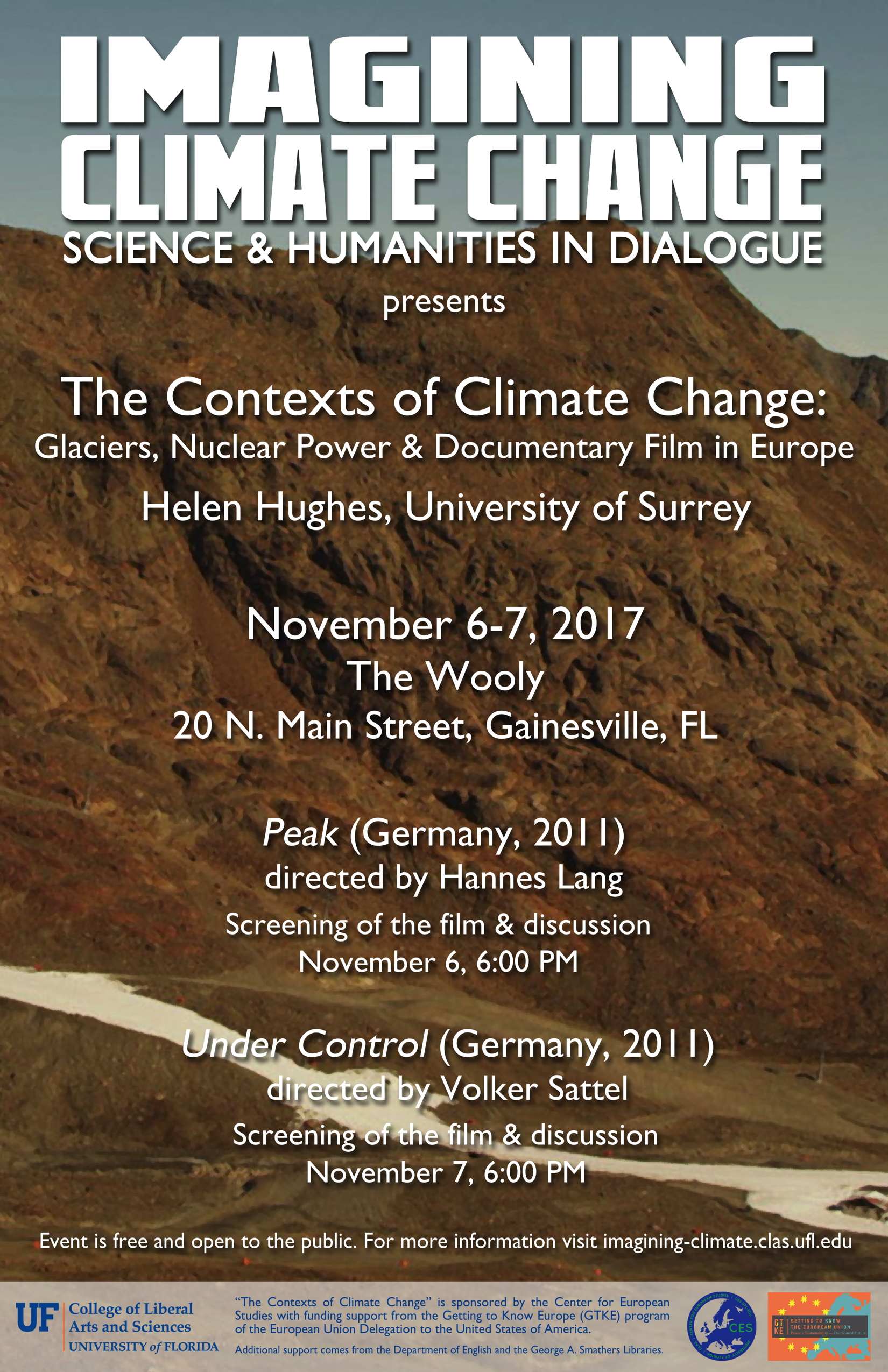 Imagining Climate Change: Science and Humanities in Dialogue presents “The Contexts of Climate Change: Glaciers, Nuclear Power & Documentary Film in Europe”
Helen Hughes, University of Surrey
November 6–7, 2017
The Wooly, 20 N. Main Street, Gainesville, FL
Peak (Germany, 2011), directed by Hannes Lang
Screening of the film & discussion
November 6, 6:00 PM
Under Control (Germany, 2011), directed by Volker Sattel
Screening of the film & discussion
November 7, 6:00 PM
……………………
About the Films
Peak (Germany, 2011, 86 mins.)
Skiing! One of the most popular leisure activities in the winter: perfect powder snow, sound, mountains, fresh air and après ski. Over the course of one year Hannes Lang’s Peak follows the building and production processes around winter tourism in the Alps and unveils what is otherwise hidden under a thick blanket of artificial snow. The film shows the modification of whole areas and the traces left behind by these human-made interventions. Peak challenges the relation between nature and technology. How artificial can a region be, or how artificial does it have to be in order to satisfy our vocational desires for fun and recreation?
Under Control (Germany, 2011, 98 mins.)
Volker Sattel’s Under Control is a tour of the nuclear industry in Germany and Austria: active and disused nuclear power stations, training facilities, the International Atomic Energy Agency, an institute for risk research, the Annual Meeting on Nuclear Technology, a permanent repository for radioactive waste. The images are breathtaking: a fuel rod is slowly accompanied by the camera; countless brightly blinking lights on the control room panels like in the cockpit of a spaceship; a long journey into the depths of a storage shaft; a giant vertical swing in the cooling tower of the fast breeder reactor in Kalkar, which never went into operation; monumental domes and desolate ruins. These images bear witness to fascination and menace, tragedy and risk in equal measure. A cross between science fiction and an industrial film, Under Control is an idiosyncratic examination of a dangerous technology, an insight into a hermetic world. Most of all it is a film about the aesthetics of one of the 20th century’s distinctive technologies and its spaces.
……………………
http://imagining-climate.clas.ufl.edu/contexts-of-climate-change/
See the above URL for more information, including biographies of the speaker and discussants, etc.
“The Contexts of Climate Change” is sponsored by the UF Center for European Studies with the assistance of a Getting to Know Europe grant funded by the European Union Delegation to the United States of America. Additional support comes from the Department of English and the George A. Smathers Libraries. All ICC events are free and open to the public. No advance registration is required.