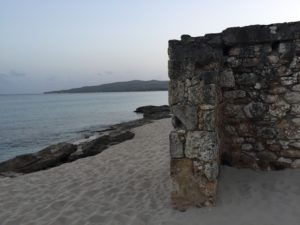 Today, I’m at St. Croix to meet with folks at the University of the Virgin Islands to discuss Caribbean Studies, Digital Scholarship, and the Digital Library of the Caribbean or dLOC (presentation slides). Soon, I’ll be meeting with the Territorial Archives, which just released the fabulous news below!

Commissioner Dawn L. Henry, Esq. is pleased to announce that Early Historic Danish West Indies newspapers are being digitized and now available for researchers online. The latest digitization announcement was made last month by the Statsbiblioteket, the State and University Library located in Aarhus, Denmark.
“DPNR’s newspaper and documentary digitization projects will significantly complement the D. Hamilton Jackson featured exhibit, which has been on display for ten months in the Florence Williams Public Library. This project will also complement the DLAM websites’ feature on D. Hamilton Jackson with links to additional historical information created in recognition and celebration of D. Hamilton Jackson,” said Commissioner Henry.
Danish West Indian newspaper titles being digitized by the Statsbiblioteket include The Bulletin, the Danish West Indian, Lightbourn’s Mail Notes, The Herald, The Royal Danish American Gazette, Danish West Indian Regierings Avis, St. Croix Avis, The Saint Croix Bulletin, The Saint Thomas Gazette, Sanct Thomæ Journal, the Saint Thomas Herald and The West End News.
In 2012, the Statsbiblioteket, a public institution operating under the direction of the Danish Ministry of Culture, launched a national historical newspaper digitization project for Denmark.  As originally conceived, the project did not include the newspapers from any of the Danish colonial possessions.  When the project launch caught the attention of several researchers in the U.S. Virgin Islands and elsewhere, they made known their interests in including the newspapers of the Danish West Indies.
“We have for many years received requests from users who demand exactly these titles,” writes Karen Williams, Danish State Newspaper Collection Digitization Project in her online project blog.  “The inquiries have come from both Denmark and abroad, and it is therefore a great pleasure to finally be able to celebrate [with] so many people.”
Images of the Danish West Indian newspapers are expected to be freely accessible and searchable online before the end of 2016 through the Statsbiblioteket’s Media Stream Newspapers website at

http://www2.statsbiblioteket.dk/mediestream/avis. “The project will be contributing to the many activities surrounding the 100th anniversary of Denmark’s sale of the West Indies to the United States”, noted Ms. Williams.
The Territorial Archives, a unit of the Division of Libraries, Archives and Museums, in collaboration with the Digital Library of the Caribbean (DLoC) and the University of the Virgin Islands, is also digitizing for free public access issues of D. Hamilton Jackson’s newspaper, The Herald.  Over 3,000 pages are already available for viewing and downloading online through DLoC.  The link to the DLoC website may be found online at the home page for the Division of Libraries, Archives and Museums at
www.virginislandspubliclibraries.org
For more information on accessing these documents contact Susan Lugo, Territorial Archivist at (340)774-0630 (email: susan.lugo@dpnr.vi.gov) or Ingrid Bough, Territorial Director of Libraries, Archives and Museums (340)773-5715. Visit the Division’s website: www.virginislandspubliclibraries.org
###
JAMAL NIELSEN
Special Assistant to the Commissioner/Media Relations Coordinator
#45 Mars Hill
Frederiksted, Virgin Islands 00840
(340) 773-1082
(340) 643-6013 cell
website: http://dpnr.vi.gov