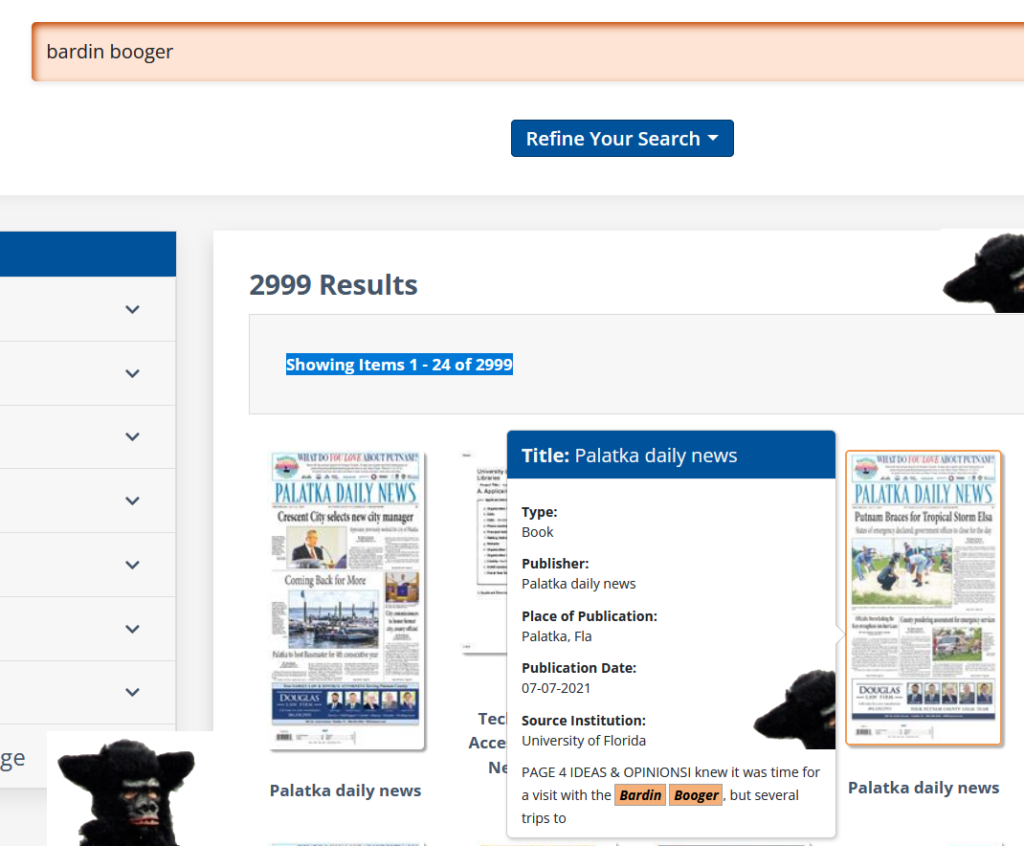 Being able to make jokes (even silly ones of photoshopped in Bardin Boogers onto screenshots) is another milestone in a successful launch!

Huge thanks for UF Library Technology Services’ Digital Development Team: Cliff, Doug, Julio, Dustin, and Jeremiah! Huge thanks to Cliff for this image and the levity it brings! Huge thanks to Matthew for asking about the Bardin Booger, for a lively user stakeholder meeting, and an excellent test term for ongoing work.

The team went live with the new patron interfaces on November 29, Monday, at 7am. There’s nothing quite like being part of a team all readied on email, phone, and messaging, watching a system come up. Everyone is watching, checking, and reviewing vigilantly. The system has completed indexing and the updater is running for changes (expected completion ~12/24). In the new year, we’ll have a roadmap for Q1-Q4 of 2022.

Again, huge thanks to the Development Team for getting us here! The systems are live as beta, with the original system still available. The existing UF Digital Collections (UFDC) and Digital Library of the Caribbean (dLOC) went live originally in 2006. The interface iterated from 2006 to 2009 (or maybe through 2011), but it has been largely unchanged over the past 15 years. That means not mobile responsive, and not post-iPhone style design changes. In a mobile-first world, it meant a huge amount of change technologically and for users. Even 5 years is a web lifetime, so we knew the cultural change for existing users was going to be dramatic. Plus, we  even more so in terms of impact on internal expert folks who support users. We also had to ensure that production was not impacted while putting up a new patron site. We had lost a lot of institutional and system knowledge with churn-level turnover, and the workload on this was extreme. We have technical complexity and sociotechnical complexity on this one.

This stuff is very difficult. We watched November 29, Monday, and waited at the ready. We calmed a bit Tuesday. That Friday, we’d seen over 108,000 views and now we’re over 1 million. Production had zero downtime. A few new deployments went to cover a minor bug, updated handling for permanent URLs missing standard ending (not requested prior, and as of launch, was noted as a concern), a new collection, and updates for existing collections. And, known needs confirmed and added emphasis on prioritization. The week after go-live, with confirmed zero production downtime and all systems functioning, we declared success for launch! Now, we get to share happy news of the updated index, and the Bardin Booger sitings!

I’ll try to post more here on next steps. I probably won’t do so until in the new year, and look forward to sharing the roadmap as we move forward!

2021-12-14
Previous Post: Another new newspaper in the Digital Library of the Caribbean (dLOC)
Next Post: Call for papers – ACURIL 2022, Curaçao

4Ls as Liked, Learned, Lacked, and Longed for https://laurientaylor.org/2022/05/16/4ls-as-liked-learned-lacked-and-longed-for/