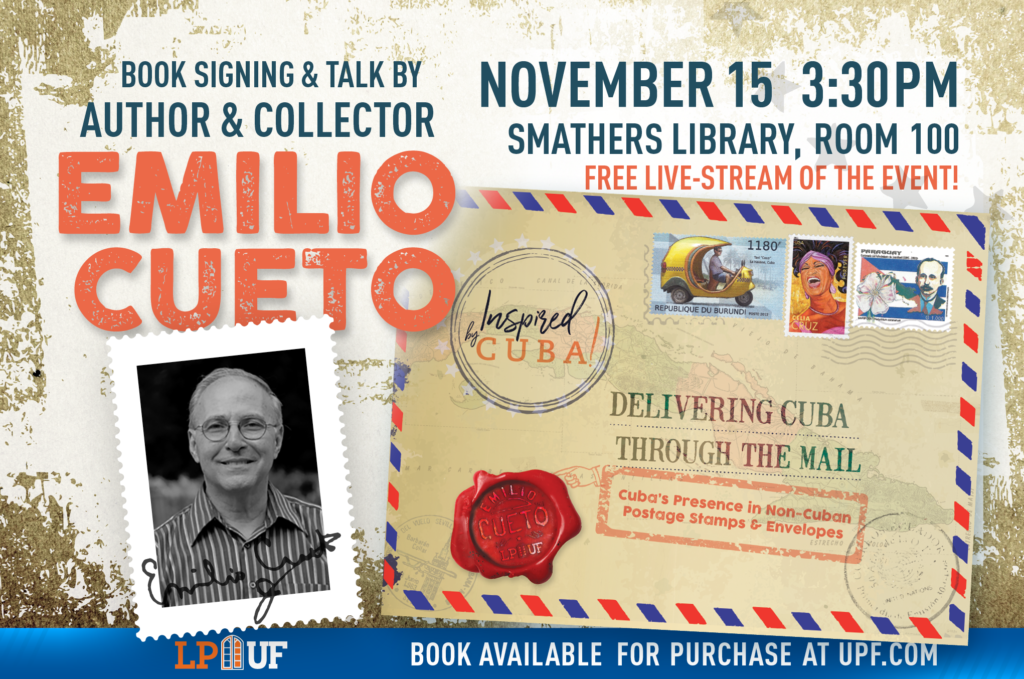 Free and open to the public.

This event celebrates the publication of Inspired by Cuba, Delivering Cuba Through the Mail: Cuba’s Presence in Non-Cuban Postage Stamps and Envelopes by the LibraryPress@UF. The book is a lushly illustrated volume by renowned author Emilio Cueto telling the story of Cuba as depicted in over 1,000 stamps from countries other than Cuba.

On May 1, 1840, the United Kingdom issued the first postage stamps in the world: the Penny Black and Two Pence Blue. Other countries soon followed. In Cuba, then a colony of Spain, the first stamp in 1855 depicted the image of Queen Isabella II, the sovereign of the Spanish Empire at the time. After Cuba separated from Spain, came Cuban stamps, where Cuba told its own story on stamps. And, that has been the practice ever since. As a result, finding Cuba-related images in Cuban postage stamps is to be expected and comes as no surprise to anyone.

Much less known and studied is the fact that, from time to time, Cuba somehow shows up in foreign postage stamps as well as in so-called “cinderellas” (resembling stamps, but not issued for postal purposes). It also appears in the design of souvenir sheets outside of the stamps themselves and in the cachets printed on commemorative envelopes and postcards. This is a fascinating story in itself and the one told in this book for the first time.

This is the second volume in the Inspired by Cuba! series, following Inspired by Cuba: A Survey of Cuba-themed Ceramics, which explores the many ways in which the island of Cuba has been immortalized in ceramics.

How much for an honoraria? A workshop? https://laurientaylor.org/2022/05/23/how-much-for-an-honoraria-a-workshop/