UF’s Digital Humanities Library Group (DHLG) is starting a new training program for folks in the libraries for greater knowledge and support in undertaking DH projects in the libraries and in collaboration with others.  In planning training programs, there’s a portion of time on examining tools and software to see about applicability and fit for research needs as well as their fit in terms of how they support learning important larger concepts and developing useful habits and practices that extend beyond the specifically intended software design and research application.
I’ve been looking at Juxta Commons, which seems incredibly useful for collation. While I don’t know how needed/applicable collation is for folks, Juxta Commons also seems to demonstrate many aspects of  textual analysis processes and software configurations and controls. 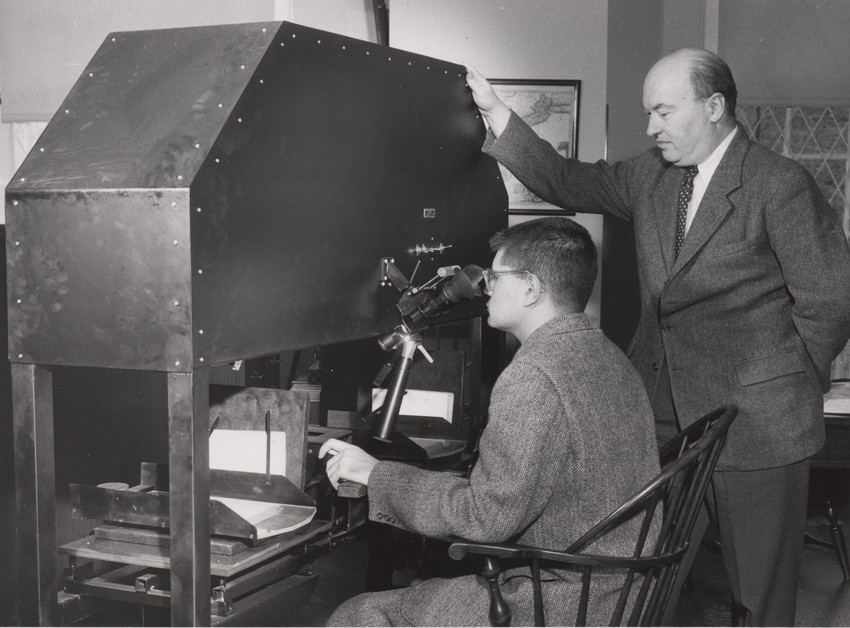 In thinking of Juxta Commons from that standpoint alone, I’m wondering about how to design a training and whether it would be useful to design a training that pairs Juxta Commons as modern-day software with prior, embodied and very large tools for collation. Part of my thinking on this is because UF has a Hinman Collator, and the presence of it is on my mind.  The Hinman Collator, per Wikipedia, was:

an early optical collator, was an opto-mechanical device for comparing pairs of documents for differences in the text. Documents that appeared similar were said to “collate”. The collator resulted in rapid advances in the study of literary works.

Invented by Charlton Hinman in the late 1940s, the device used lights and mirrors to superimpose images of the two documents so that differences in text alignment or wording stood out. This resulted in huge improvements in speed and efficiency compared to the traditional cross-referencing of texts by eye.

The Hinman Collator is also pretty huge. Or, as Shawn W. Moore more accurately puts it: “Hinman Collator is insane” (tweet). The Hinman Collator is insane, at least in part, because of it’s sheer size and physical presence. Insane physical size can impact a powerful sense of the embodied presence that can be extremely productive.  I’ve worked to convince people to go on  tours of server rooms, which may not be terribly exciting places, but where the sheer size of the row upon row upon rack upon rack of  servers, wires, organizers for wires and racks, status lights, and cooling system components, and the noise of so many machines and vents and the unnatural lighting of status lights and interior lights with no external light, it all combines into an experience of the technology that can be informative and provocative in helping people to think through and with and to embrace and critique the technical in new ways.
Coupling an experience with the Hinman Collator with modern software like Juxta Commons could be structured to be very productive, and could in some small way at least point towards larger issues and concerns, like those Josh Honn shares in his excellent “Never Neutral: Critical Approaches to Digital Tools & Culture in the Humanities.”   I’m not sure if we’ll have  training session on the Juxta Commons software alone, or if I’ll create a training that combines Juxta and Hinman, but it is helpful for me to spend time thinking about how to teach tools and software in ways that don’t necessarily or don’t at all teach the tools, and instead help to foster opportunities for new ways to engage with and learn tools and practices.

4Ls as Liked, Learned, Lacked, and Longed for https://laurientaylor.org/2022/05/16/4ls-as-liked-learned-lacked-and-longed-for/

A special thanks to authors whose critical perspectives will strengthen future work-- showing that gaps and silences remain, that public access is not the right choice for every project, and that we have a duty to credit every dLOC partner: https://dloc.domains.uflib.ufl.edu/partners/ https://twitter.com/elotroalex/status/1524812246064447493

We are very proud to publish Issue(6) of archipelagos journal. In this special issue @inthewhirld & I want to honor @dLoCaribbean & librarians in general. Guest edited by @perrycollins @Dr_Saint_Herard who did an a-ma-zing job. Enjoy! http://archipelagosjournal.org/

Check out my article where I argue that #linguistic #data is patrimony. Linguists, are you sure that data you collected is yours?
Big congrats to special editors @perrycollins
@Dr_Saint_Herard http://archipelagosjournal.org/index.html
1/5 https://twitter.com/elotroalex/status/1524812246064447493

We are very proud to publish Issue(6) of archipelagos journal. In this special issue @inthewhirld & I want to honor @dLoCaribbean & librarians in general. Guest edited by @perrycollins @Dr_Saint_Herard who did an a-ma-zing job. Enjoy! http://archipelagosjournal.org/